This story was originally published in the Montreal Gazette 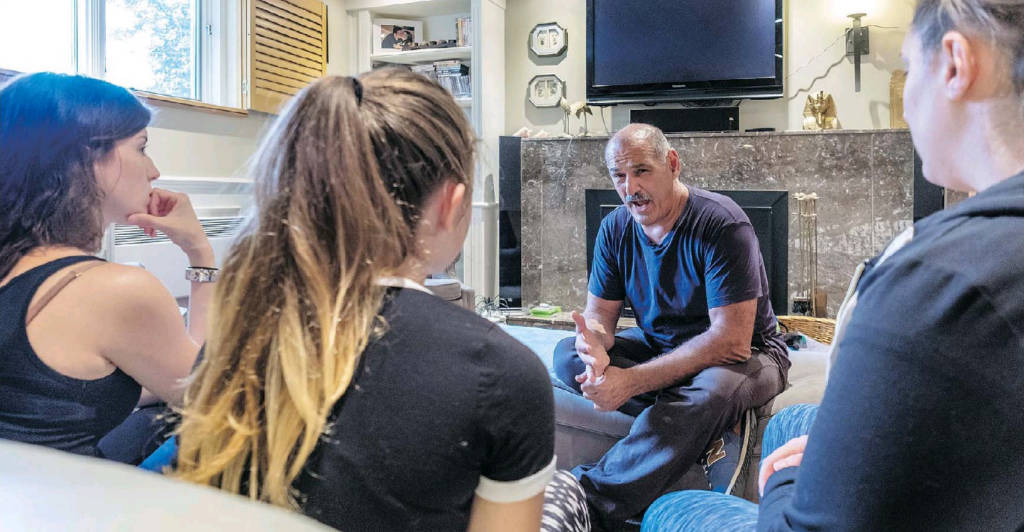 Mon­treal po­lice of­fi­cer Ge­orge Manoli spends his off hours teach­ing the rudi­ments of self-de­fence to women. Above, Manoli puts three stu­dents, Sara Melina Anoie, left, Noemie Del Duca and Cyn­thia Donato, through the pro­gram he cre­ated about 35 years ago at his home in Saint-Leonard. (Photo by Dave Sidaway)

He looks like a frightening cross between Mr. Potato Head and RoboCop, covered in protective gear from his Styrofoam-covered head through to his hockey-padded groin, knees and even toes. And even at that, George Manoli, under 40 pounds of this garb, has still sustained a few injuries.

Manoli, the veteran Montreal police officer underneath the padding, is spending his offhours, as he usually does, teaching some women the rudiments of self-defence to ward off wouldbe sexual predators. Although he has an array of black belts in various martial arts, Manoli is essentially instructing women not on the intricacies of kung fu or karate, but rather on, yes, down-and-dirty street fighting.

“If women are about to be sexually or otherwise assaulted, they have very little time to react and they sure as hell won’t remember the finer points of some martial arts to keep their attacker at bay and get away,” says Manoli, in the midst of teaching his methods to a trio of young women in his StLéonard garage.

Instead, he urges these women, as well as others he instructs throughout the city, to scream, kick, scratch and gouge their attacker in their most vulnerable areas — their eyes, noses and groins. But Manoli does more than just talk; he also plays the role of the predator, albeit a far more well-padded one, and has the women strike at him during his hands-on attack simulations.

Which they do. With a vengeance. Hence some of the bumps and bruises he has sustained. According to the many testimonials he has received from students having dealt with attacks, Manoli’s methods have worked.

Noémie, 22, one of the students taking his course for the first time, is petite. Forever smiling, this software engineer may look like a mark to some Neanderthal, despite the fact she has had previous martial arts training. But when charged by Manoli in a simulated attack, she lets loose with a series of blood-curdling screams, powerful kicks to his mid-section and a flurry of nasty punches to his eyes and nose.

“Even with all the padding I’m wearing, I felt that,” Manoli notes. “She would put the fear in any would-be attacker, which is precisely the point.”

Manoli can lose up to five pounds, sweating profusely under his gear, in a three-hour session.

“That’s not such a bad thing, since my wife, a pastry chef, can have me put it right back on,” quips Manoli, the father of three sons — one of whom is also a city cop.

Not surprisingly, Manoli has been embraced by women’s groups around the city. He offers his courses at schools, CEGEPs, martial-arts facilities, church and synagogue basements and his own home.

“Business is good, but that’s not necessarily a good thing,” he says. “That means an awful lot of women are feeling vulnerable. Unfortunately, my off-duty time is limited, so I’m unable to meet the demand. This has all been by word of mouth. I don’t solicit at all. The goal is simply to empower women, young and old.

“I was called by women involved in the #MeToo movement and asked if I noticed an increase in demand for selfdefence. I told them that I had doubled and tripled the number of courses I do in recent years. The reason is likely because it’s a hands-on course.”

A phys-ed teacher in a previous life, Manoli has been a Montreal cop for the past 29 years. He works in crime prevention at Ahuntsic-Cartierville’s Station 27, dealing with social workers and mental-health professionals on everything from young offenders to conjugal assault to seniors abuse.

Manoli, who has a sixth-degree black belt in karate and a black belt in judo and is working toward another black belt in Brazilian ju-jitsu, has been teaching self-defence since he was 16. Apart from his other teaching assignments, he also runs the Beaconsfield Karate & Grappling Club.

He put together the selfdefence program he is currently teaching about 35 years ago. 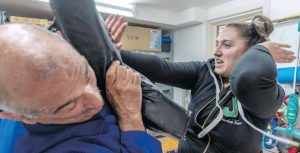 “When I started the program, I looked at what others were teaching and thought it was so crazy, even dangerous, trying to teach women to put attackers in an arm lock or sit on them until the police arrive. I can teach people a martial-arts trick, but three minutes later when they walk out the door, they’ll forget everything.

“People will remember what has been tattooed into them. If you want to learn how to defend yourself, well, I’m sorry to say but somebody has got to attack you. So by being attacked, you develop this never-say-die attitude. And as I tell my students, it makes no difference what I do to you — it’s what you’re going to do to me.”

So the focus of counterattack for his students is on two areas: eyes/nose and groin.

“They can put their thumbs in attackers’ eyes, bite their noses. Whatever. It doesn’t matter. The important thing is to go with whatever your personality or size allows you to. You have to bring out your inner T-Rex. It’s as simple as that. Some may demonize this, but it is a natural survival instinct. Predators have to understand that no means no, or that they will have to pay a price otherwise.”

One of the better testimonials Manoli has received comes from his own niece, who warded off two attackers at a métro station using her uncle’s strategy: “Uncle George, thank you for being the bastard you were when you gave me the course,” she said.

“I’m super-tough, but if it prevents attacks, so be it,” Manoli says. “Best that I’m tough here, because (the) easier it will be out there.”