This story was originally published in The Suburban 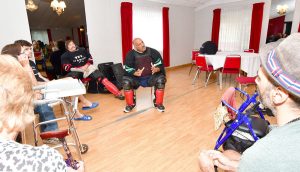 It isn’t often that George Manoli learns something new. The 28-year veteran police officer and longtime martial-arts instructor has seen just about everything you can see in his 45 years of teaching self-defence, but when he signed on this summer to teach an adapted self-defence course to members of the West Island Multiple Sclerosis Self-Help Group, he realized that maybe he hadn’t seen everything – just yet.

“I learned as much from them as they did from me,” said Manoli, who runs a karate club in the Beaconsfield Recreation Centre. “When you teach self-defence, you teach people to punch and kick, but what do you teach them when they can’t necessarily punch or kick?”

So Manoli adapted the course and spent a half-dozen, nearly two-hour sessions with 15 members of the MS Self-Help Group throughout May, June and July at the Karnak Temple in Dollard des Ormeaux teaching them the different strategies they can use to fend off attackers should they find themselves in that situation.

“Every situation is different, so the strategies you would use will vary. For instance, if you know your attacker vs. if you don’t know your attacker, you will handle those two situations differently,” said Manoli, who is known for sporting a ‘Humpty Dumpty’ padded suit and headgear as protection when he teaches his classes. “A lot of people think that in a dangerous situation, you have to either attack or negotiate, but there is a third option available — and that is passive resistance. You have to fight intelligently.”

Read the rest of the story on The Suburban